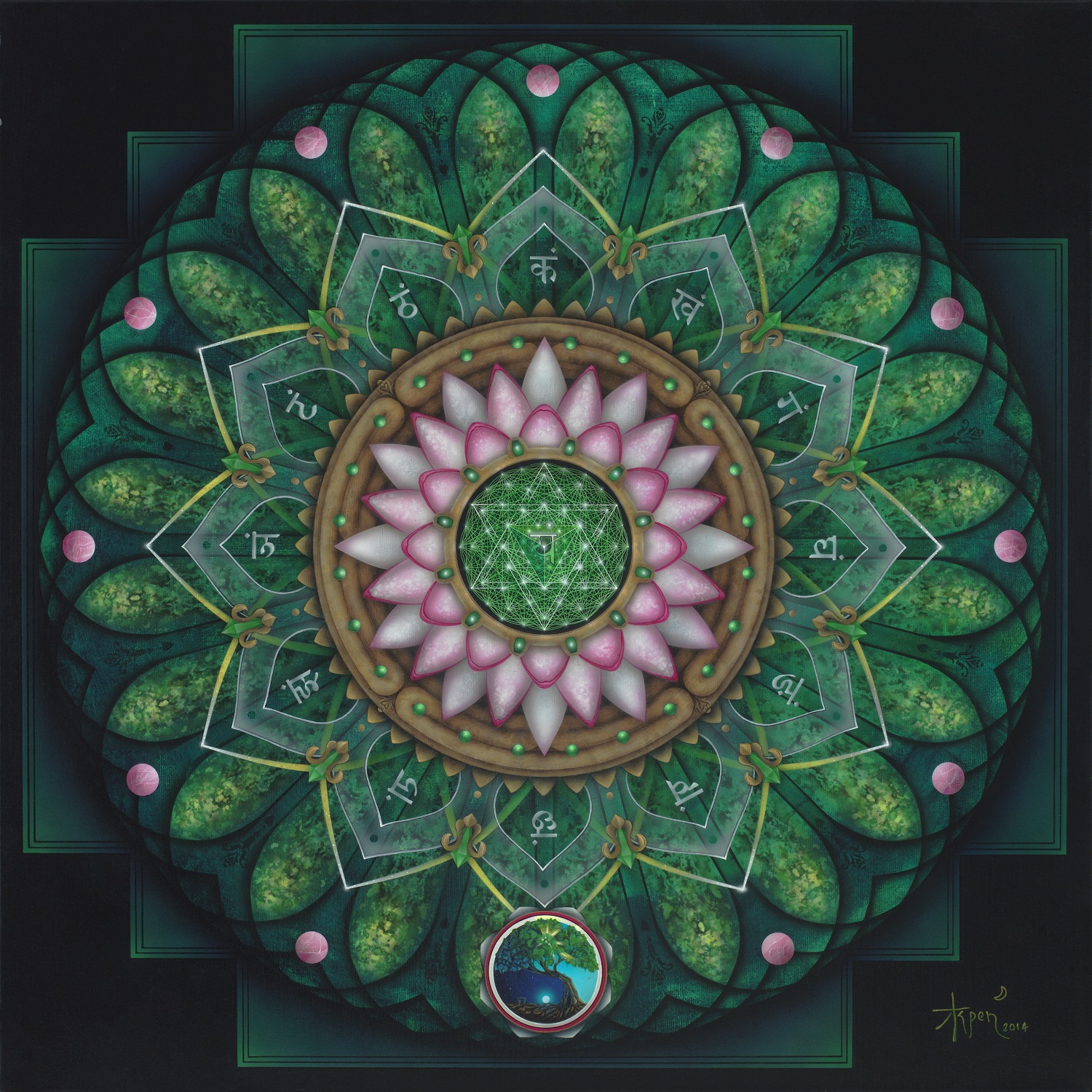 Anahata (Sanskrit: अनाहत, Anāhata) is the fourth primary chakra according to the Hindu Yogic, Shakta and Buddhist Tantric traditions. In Sanskrit the word anahata means “unhurt,” “unstruck,” or “unbeaten,” meaning the sound was created without using a strike or a pluck or any other kind of disturbance that normally creates sound waves in air. Anahata Nad refers to the Vedic concept of unstruck sound, or the sound of the celestial realm. Anahata is usually associated with a calm serene sound, without disturbance or dissonance.

The Anahata Chakra, often called the Heart Chakra is the center point, the place of balance, the kernel of truth, the essence of the self, the core, the spiritual center, and the balancing point between the inner and outer, between above and below. The Heart Chakra acknowledges that it is when we come into wholeness that we plant the seeds of inner peace.

Representations of the Anahata Chakra are varied and many and range from detailed, fully iconic renderings based on the classical view of the Chakra to simple geometric forms—literally thousands of wonderfully unique ways to represent the Anahata Chakra are available online. My version keeps some of the basics, but also elaborates certain aspects.

The most basic portrayal of the Anahata Chakra is the 12-pedaled lotus with a shatkona, which represents the union of the masculine and feminine forces, in the center. Commonly the letter Yam (Sanskrit: य ) is included and would be a sure indication that it was intentionally an Anahata Chakra symbol rather than just a geometric or 12-pedaled flower. Beyond that is a spectrum of different representations which incorporate an array of additional symbols, including archetypal deities. Fully elaborated portrayals can feature Ishana Rudra Shiva and Kakini Shakti separate, and then Kundalini Shakti and Rudra Shiva together (i.e. in symbolic union).

Good sources for all the basics (including what you just read) are Wheels of Life, 2nd Ed., by Anodea Judith, PhD, Llewellyn Worldwide (2011), and Wikipedia.” 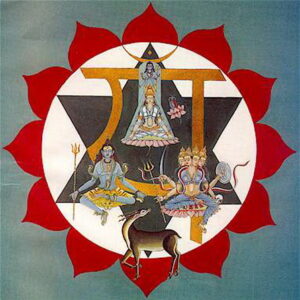 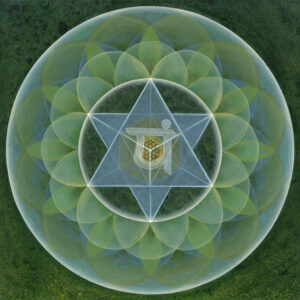 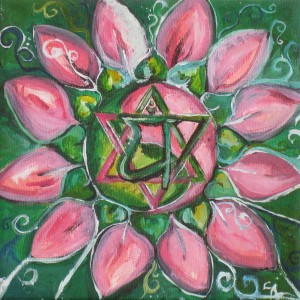 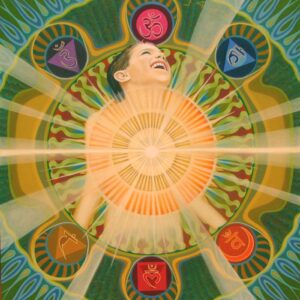 The rose window section of my Anahata was created using the ubiquitous, iconic heart shape. Simply spinning around the heart pattern around a center point at every 15 degrees arc (i.e. 360 / 24 = 15) created the pattern (i.e. a common heart pattern painted 24 times). I’m often quite dazzled to discover the beauty that simple geometry creates. It is, after all, our underlying structure—from our DNA on up to the proportions of our extremities. We are literally crystallized into being. But I wanted to insinuate that we’re crystallized through the interweaving of others—12 pairs of hearts come together to weave the background (i.e. our context of being).

Behind this is the chakana, or Aztec Cross, which symbolizes the three levels of existence—Hana Pacha (the upper world inhabited by the superior gods), Kay Pacha (the world of our everyday existence), and Ucu or Urin Pacha (the underworld inhabited by spirits of the dead, the ancestors, their overlords and various deities having close contact to the Earth plane), (Source: Wikipedia). The chakana can also represent the Tree of Life. Placed in this artwork as the structure supporting the blossoming heart, it suggests the boundless reach of our hearts—to the heavens, to our ancestors, to all who live.

An often overlooked part of the Anahata Chakra is a lower positioned, minor chakra called the Hrit, Hridaya (meaning “heart”), or Surya Chakra, which is an eight-pedaled lotus containing the Kalpavriksha, or wishing tree. It is from this minor chakra (but more literally the heart chakra) that one affirms the ability to manifest whatever one wishes in this world. The wish fulfilling tree is a part of many cultures throughout the world and could easily been asserted as an early incarnation of our modern Christmas tree. Here is the altar upon which the wishes of your heart are laid.

I could go on and on…about the Sanskrit symbols, about the associated gods, the antelope, or about the associated elements and words and sounds and crystals and flowers, or about the deeper meaning of the colors or the form… But I’ll leave all of that to other experts and the thousands of pages of information available online. Just follow the thread that is given to you, motivated and linked by your own interests and desires. The aforementioned Wheels of Life is a good resource to get you the basics as well as some deeper concepts. Beyond that, I’ll leave to your imagination, meditation, and discovery.

Moreover, the discovery of your true heart is a personal journey. Not me, nor anyone else for that matter, can tell you what path to take. This path is all your own.

Hope you enjoy meditating on Anahata! There’s lots to discover when you ponder the truth in your heart…

[quote cite=”Atharva Veda 9.2.19″]Love was born first, the gods cannot reach it, or the spirits, or men…Far as heaven and earth extend, far as the waters go, high as the fire burns, you are greater, Love! The wind cannot reach you, nor the fire, nor the sun, nor the moon: You are greater than them all, Love![/quote]

Here are some photos of the 5-month process of creating Anahata. 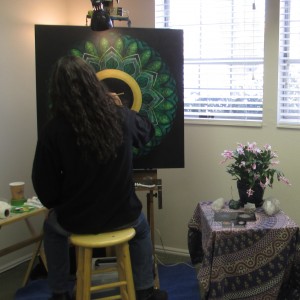 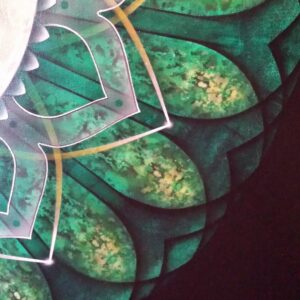 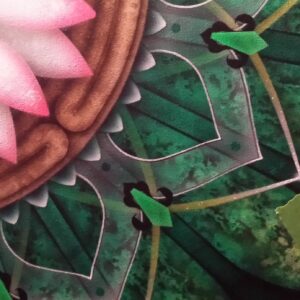 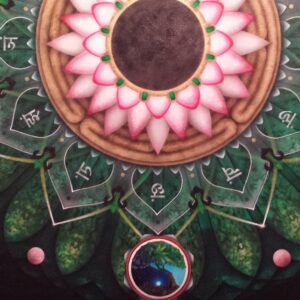 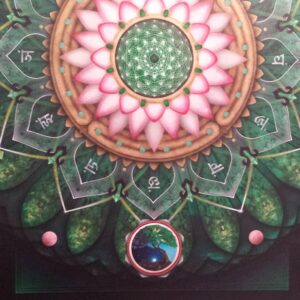 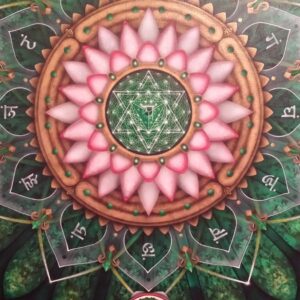