Mandala for the Earthlings 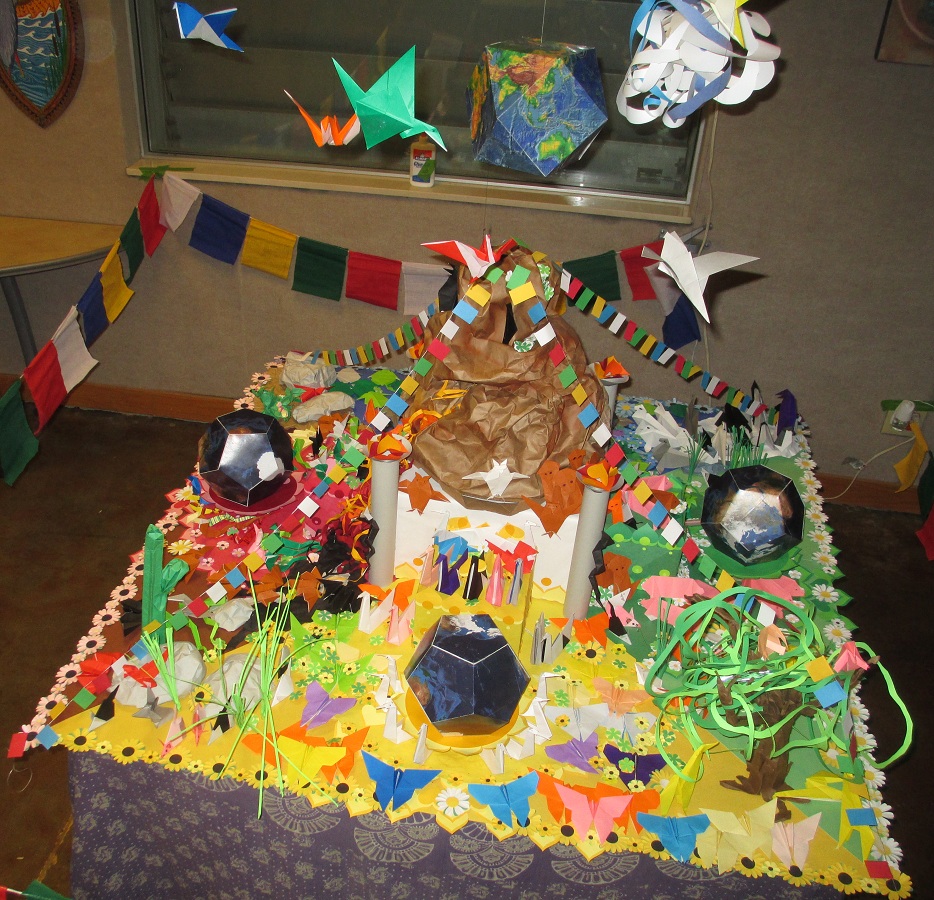 Recently I was given the invitation to do performance art at a charity fundraiser for wildlife preservation. Rather than doing my usual live painting, I decided to go beyond and create something more intentional.

I came up with the idea to create an offering mandala, inspired by the Tibetan Buddhist practice of Trikaya, which is a practice used to gain merit, positive benefits, or independence by offering the entire universe in a petition to specific deities or forces. Almost invariably offering mandalas, which are expressed through the commonly known sand paintings as well as ritualistic arranging of sacred rings filled with polished stones, represent the cosmos. Then sand mandalas are structured after scriptural descriptions of the universe, with the sacred Mount Meru in the center and the continents, waters, mountains, deserts, seven emblems of royalty, etc., radiating outward. This representation imbues the most earnest and sincerest of sacrifice because everything is sacrificed.

Instead of using sand, I chose a medium equally ephemeral, equally rooted in tradition, but more suitable to the event: paper.

Following the traditional construction of the universe, the mandala is divided into quarters, representing directions, elements, and forces through the traditional colors of red, green, blue, and yellow. In addition, I created elements of the various spheres of life—the land, the oceans and waters, cloudy skies, ice caps, mountains and deserts…all in paper. Hundreds of paper flowers and heart-shaped pedals also decorate the mandala.

After creating the universe, I filled it with the life of all the spheres. Each animal was folded out of a single piece of paper using the traditional art of origami. Hundreds of birds and insects, fish and water creatures, beasts of burden, hunters and prey, even slithery and crawly things, all in a nod to the creatures that have sustained the growth of the human species.

In fact, it is upon the backs of all Earth’s inhabitants (Earthlings: every single creature that calls Earth its home) that we humans stand. It is thanks to all of them that we, as a species, get to enjoy jumbo jets and Shakespeare and body piercing and YouTube.  In other words, everything you enjoy as the human experience has this planet and its life to thank, as well as the evolutionary process that enabled and supported your consciousness to enter such a highly empowered animal form on this planet, at this time… Problem is, it seems like so few actually understand, appreciate, or acknowledge this gift. And scientists on NPR news are saying the 20th Century looks like the largest mass animal extinction event in 13,000 years…

The prayer, for which the offering is made, is simple:

For the continuation of all Earthlings, we make this offering.

Truth is, we’re in it together. If very many of them go, we’re goners too. Even losing just one species—like the honey bee—and 40-60% of our food will be gone in a season. That’s interdependence. And that’s how this planet works. Let’s work to help enough individuals wake up to that before things get really uncomfortable. 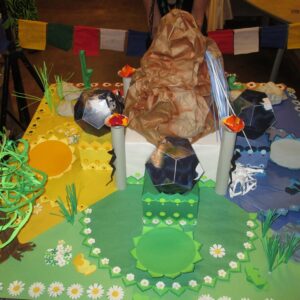 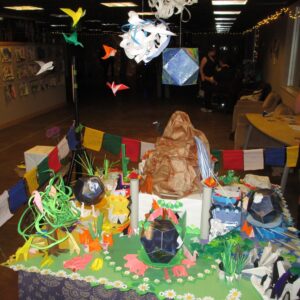 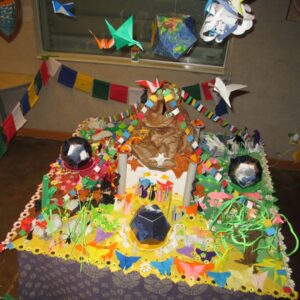 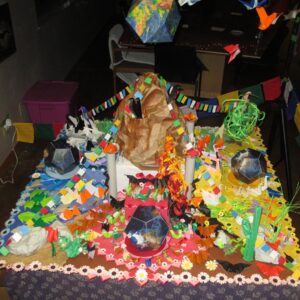 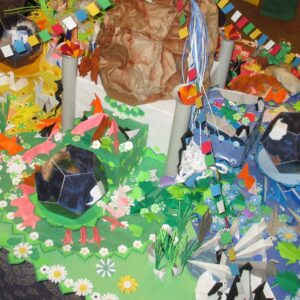 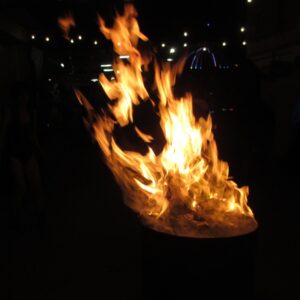 Sacred sand painting is inherently tied to the idea of impermanence. Ritual mandala offerings universally end with the ceremonial destruction of the artwork. Sand is swept up and often returned to nature in a conscious manner, representing the circular continuity and impermanence of all things. After spending many, many hours over two months creating the mandala, the offering was destroyed. In this case by fire. And our prayer is released to the Universe, to our Angels, and to our Ancestors.

A visual tour of the Mandala:

A very special thanks to those who came to my paper-folding workshops and helped me create some of the animals: Lala West (my #1 art collaborator), Alekkai Bray, Hannah Bray, Veda Bray, Isabella LaPoint, Bo Dean, Lucent Fox, Justin Jenicke, Barbarella Psychedella, and Melissa Mangum.

Tags: Mandala for the Earthlings

Go to Aspen’s Blogs about
Exhibits and Events