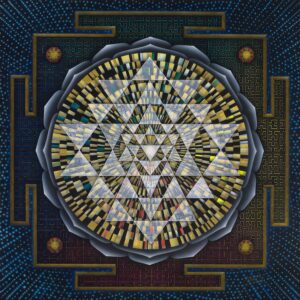 The Sri Yantra (aka Shree Yantra, Shri Yantra, Sri Chakra) is an ancient Hindu Vedic symbol, often regarded as sacred. Translated, it means “holy tool,” or “holy instrument,” and it can also mean “instrument of wealth.”  The four upward triangles symbolize Shiva, the divine masculine, and projective forces, and the five downward triangles represent Shakti, the divine feminine, and receptive forces.  Together they form a picture of balanced creative union.  The Bindu point, the point or object of creation, is in the exact geometric middle of the center triangle as well as the entire complex form.  It is also considered the “the junction point between the physical universe and its unmanifest source” (Source: Wikipedia).  It is a object that has undergone millenniums of meditation, teaching, and manifestation.  And to me, it seems to be the first step in creating a portal for consciousness to move between this Newtonian world and what lies beyond our five senses.

Concept of the Yantra (Excerpt from the book YANTRA, by Madhu Khanna)

The Sanskrit word yantra derives from the root ‘yam’ meaning to sustain, hold, or support the energy inherent in a particular element, object or concept. In its first meaning, yantra may refer to any kind of mechanical device which is harnessed to aid an enterprise. A yantra in this sense, therefore, is any sort of machine or instrument such as is used in architecture, astronomy,  alchemy, chemistry, business, warfare, or recreation.

However, the meaning of the term yantra has been expanded to refer to religious enterprises, and has acquired a special theological significance. Mystic yantras are aids to and the chief instruments of meditative discipline. Basically, a yantra used in this context and for this purpose is an abstract geometrical design intended as a ‘tool’ for meditation and increased awareness. Yantras function as revelatory symbols of cosmic truths and as instructional charts of the spiritual aspect of human experience and use symbols corresponding to inner states of human consciousness to open new doors of understanding and relevance.

“Yantras can be used as highly efficient tools for contemplation, concentration, and meditation. A yantra provides a focal point that is a window into the absolute. When the mind is concentrated on a yantra, the mental chatter slows down, and eventually stops. In advanced yantra meditation, it is possible to attain union with the power of the Universe by the geometric visualization of a yantra” (Source: Aditya Rudraksha Kendra).

I don’t think it’s by any accident that the Sri Yantra is comprised of nine triangles.

Numerologically speaking, nine triangles represents the cumulative number of creation (i.e. final creation).  Nine has some unique mathematical properties which lend to this notion.  “When you multiply any number by 9, then add the resulting digits and reduce them to a single digit, it always becomes a 9. For example, 6 x 9 = 54, reduce 54 to a single digit by adding them together: 5 + 4 = 9. Or 23 x 9 = 207, 2 + 0 + 7 = 9, and so forth. There is nothing coincidental about this peculiarity. Try it. Any number, no matter how large, multiplied by 9 reduces to 9. There is a similar way to do this with addition, rather than multiplication.  From a numerological perspective, the 9 simply takes over. Any number that was initially increased by a factor of 9 loses its own identity and instead takes on the characteristics of the 9. No other number has that quality” (Source: numerology.com).

The number nine has several other interesting meanings, which come from various cultures and epochs, and lend to our deeper understanding of the Sri Yantra (Source: Riding the Beast.com (seriously!)):

Moreover, the nine triangles–five feminine, four masculine–intersect to create 43 triangles that represent nine layers of creation and form to create a web symbolic of the entire cosmos or a womb symbolic of all creation.  Ultimately, this 6,000 year old, “mother of all yantras” represents the cosmos and the supreme creative forces of the universe.

What I find interesting, and a large part of why I have started to develop a deeper interest and understanding in the Sri Yantra is that the symbol elegantly mimics the natural physical behavior of sound.  I believe that it specifically represents the Om, which is first described as the all-encompassing mystical entity in the Upanishads and the sonic frequency of the universe.

Modern science is beginning to recognize and confirm something mystics, religious researchers, and mythologies throughout human recorded history (and likely before) have always known: that sound (i.e. sonic frequency and amplitude) has creative and organizational influence over matter.  The recently established field of study called Cymatics is the cutting edge scientific study of this phenomenon [Youtube Cymatic demonstration; Cymatics.org, Ted Talks on Cymatics].

When science, religion, and nature all weave together into a new concept for me, that’s when my art brain really starts churning…  I love to encounter links or synergies between seemingly unrelated things.  But moving this from physical concept to a spiritual one was easier that I thought, and the road has already been paved.  Terrence McKenna spoke openly for years about the power of language, and once expressed its ability this way, “the real secret of magic is that the world is made of words, and that if you know the words that the world is made of you can make of it whatever you wish” (Source: Terence McKenna, 27 February 1993).  But while many cannot appreciate the consciously-shifted perceptive Mr. McKenna openly comes from, his hypothesis is quite aligned with many faith systems, even Christianity.

“In the beginning was the Word, and the Word was with God, and the Word was God” (Bible: John 1:1).  An interesting side comment on this passage by a language scholar I found online says, “the Word at the beginning of John 1 is linked by this passage to the first words spoken by God at the beginning, when he says “‘Let there be light’ and there was light.” (Genesis 1:3). Here the sending of light is a metonymy for creation; this metaphor associates God’s word/light with purity, truth, and power as speed: there is no interval between the word and its realization” (Source: William Warner, UCSB).

One thought on “Sri Yantra Explored”

One thought on “Sri Yantra Explored”