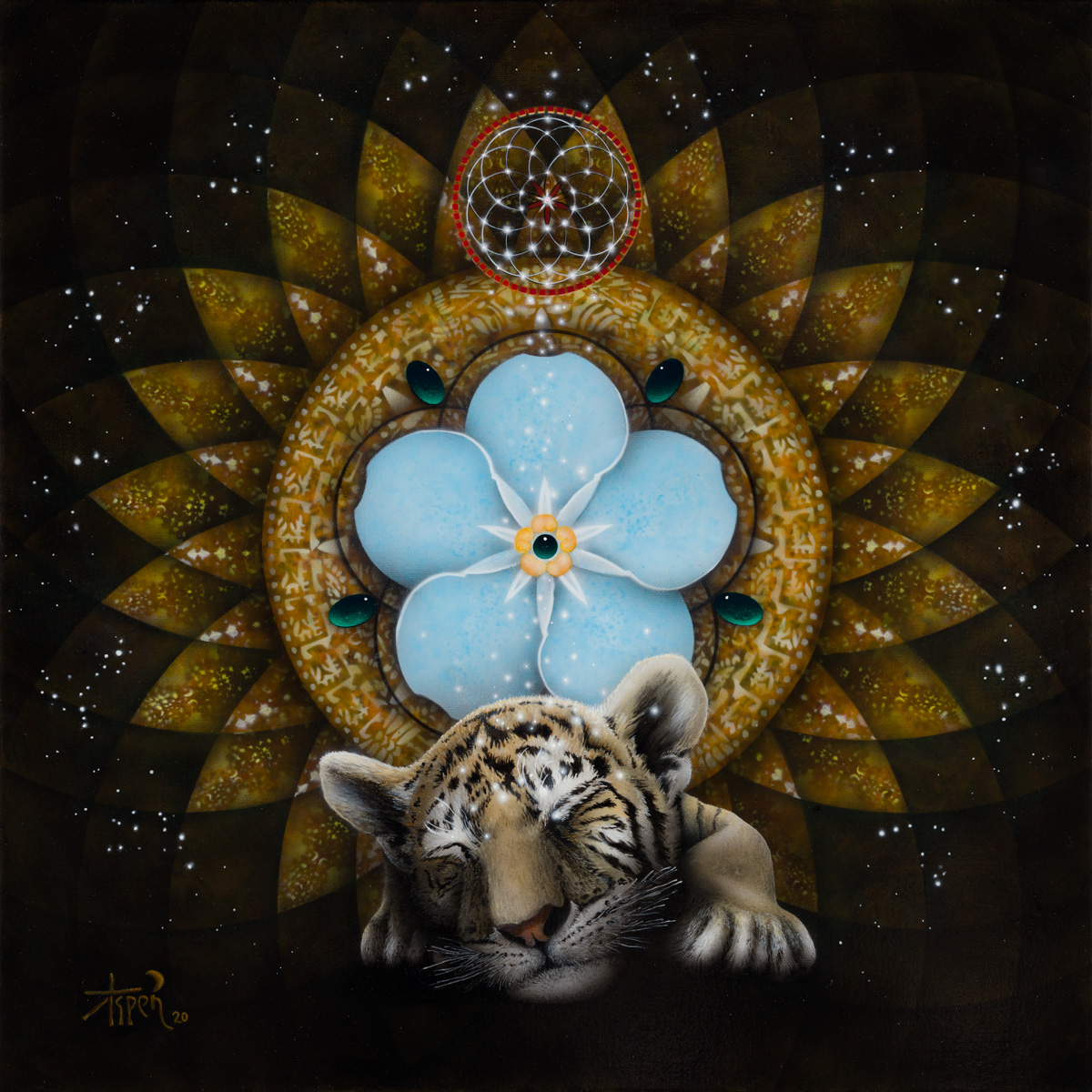 Each of us is a part of an eternal chain of existence, linking what came before to what comes after. We are connected–not only through blood and generations of nurturing, but also by our earthly ties to the cosmos, marking our place in the universe.

The painting features a tiger sleeping cub. It sleeps secure and serene as stars pour over its dream space. Because a mother tiger is very close by.

The mandala behind emanates from an ancient calendar disk, which represents both a memory and record of the past and a predictor of the future. In front, a bright blue forget me not–a five petaled flower, with a five pointed star in the center. Emeralds are called the jewel of kings. In spiritual circles, they’re associated with insight and revelation of the future. Green stones are also used to symbolize Anahata, the heart chakra. The cub rests in the position of the fifth emerald, marking it as one of the connected hearts. The number five has often been attributed and used in protection magic. With the blessings of the earth, the stars, the chronicles, and magic (and a protective mother) upon it, this cub sleeps so blissfully deep.

Above the mandala the star patterns of the zodiac decorate the heavens, caught by the dream catcher, that pours stars over the tiger and fills its dreams with visions as it sleeps.

Ultimately the painting symbols in this work point to the notion of connection. Our connection to the earth and cosmos. A mother’s connection to its child. Our connection to generations long before us and those that will come long after us. Through space and time, we are somehow connected as humans, generations, family trees. We mark passing of eons with calendars and the stars, but also with births and deaths, with a perpetuity of connection, that defines us, and gives us purpose, and ensures we are a part of something bigger than our individual selves.

This painting is the fourth in a series of five I’m doing as a commission. The series is of the Chinese Tiger Astrology for all five of the Chinese elements–Water, Metal, Earth, Fire, and Wood. This one represents the Earth element. In Chinese astrology, an Earth Tiger is described as one who gives generously and offers help willingly. They are often ambitious and unrestrained–like a tiger cub. All five will be used on labels for Brandon Armitage Winery out of Aptos, California.