Sun and Moon and Stars 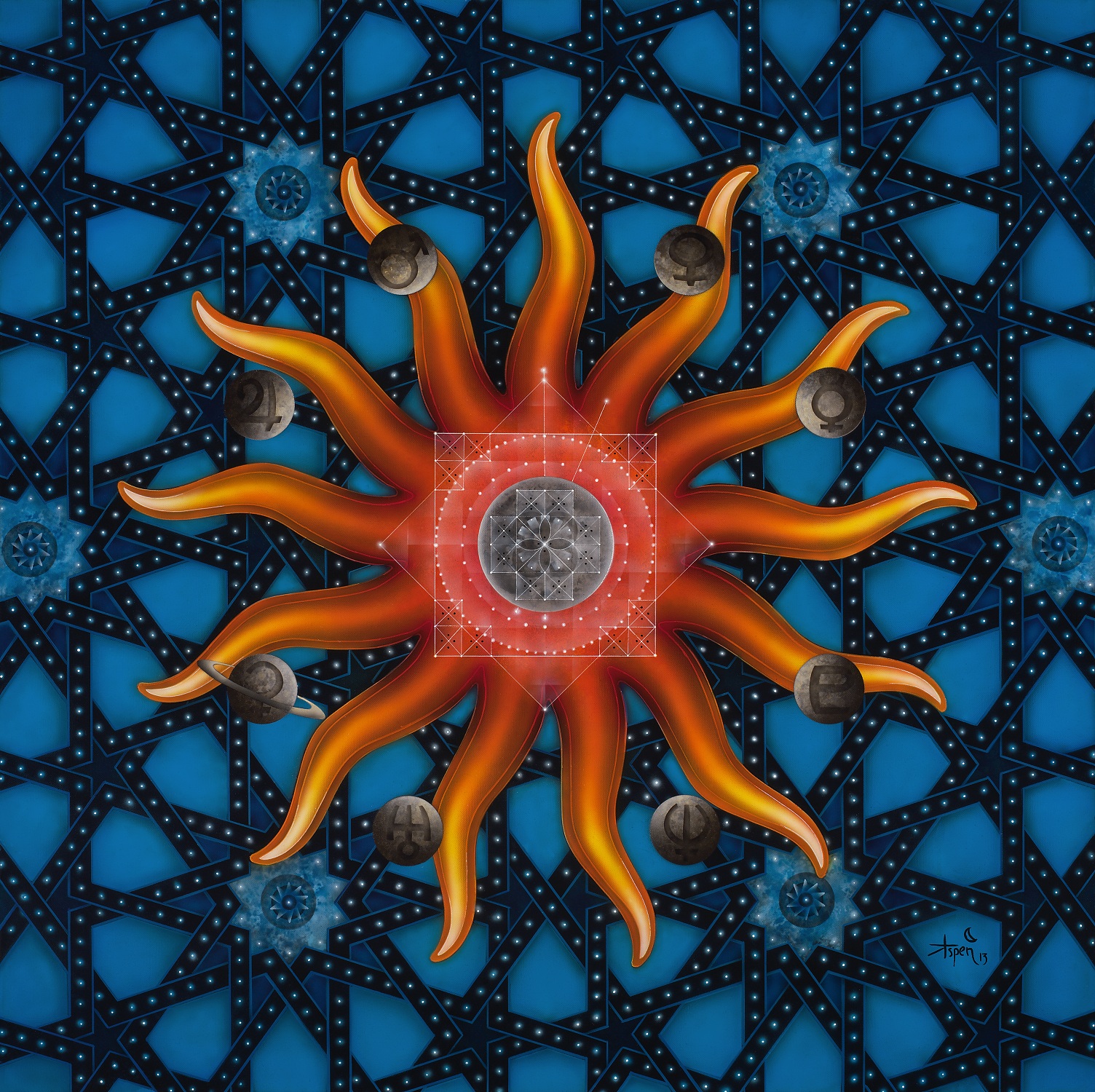 Why is it that when we think of heaven, or life after death, or where God and all the dead people live, we tend to project upward?  When we ponder, when we pray, when we look to the future, or make a petition to the universe, almost instinctively we look toward the sky, toward the celestial expanse.  In the 20th century, we’ve lived though an intense apocalyptic era, with promises of a being (or beings—from the Annunaki to Quetzalcoatl and ascended masters like Thoth or Jesus) who will descend from the heavens to save humanity.  We’ve also experienced a surge in the interest in UFOs and extra-terrestrial life.  We’re gaining a new self-awareness as a species, and realizing that as far as advanced intelligence goes, we’re likely not alone.  It’s as if we are anticipating another, intelligent, planet-jumping species to help move us beyond our current, difficult reality. It’s curious to me that we look so naturally upward and outward—toward the sun, the moon, the stars—when we are looking to discover, give thanks, or petition for help.

It’s easy to realize that this natural propensity to look heavenward isn’t a strictly modern or Christian behaviour.  The oldest and some of the most complicated architecture on the planet was built to track the stars, to measure the changes in the sun, the planets, and the moon, to anchor places to known dates, and to better understand the workings of the realms and mysteries beyond our Earth cradle.  From the Great Pyramids of Giza to Stonehenge, from Angkor Wat, Cambodia to Palenque, Mexico, and the Nazca Plains of Peru, ancient builders from cultures on every continent, share one fascinating similarity—that they had an in-depth preoccupation and understanding the the skies and of the motion of the heavenly bodies.

Motion is the key term here…  It’s hard to fathom, given the relatively “fixed” nature of the stars, but consider that the sun (and its system, including us) is moving in an orbit around the center of the Milky Way at around 486,000 miles per hour. It only takes about 226 million years for the sun (and its solar system) to make the full circuit around the galaxy. The last time we were at this position was 226 million years ago, when dinosaurs ruled. In addition to that, the Earth travels at 67,000 miles per hour in its orbit around the sun.  The Earth spins like a top on its axis at just over 1,000 miles per hour.  We somehow hold on with just our feet.

So while I’m typing away at my desk—a seemingly fixed point in the universe, I’m hurling and spinning through space at a rate of 1,000 miles/hr + 67,000 miles/hr + 480,000 miles/hr…  No wonder life is so dizzying and disorienting!  It’s kind of like being on a carnival ride.

Legends among many cultures—Sumerian, Aztec, Egyptian, Hopi, Dogon—that believe our early ancestors were star travelers and settlers, who came from distant planets, had children with the primitive hominids, but eventually left.  Forevermore leaving Earth’s inhabitants tied to the stars, and looking toward them for a return.  That almost sounds Judeo/Christian if you say it just right (check out Genesis 6:1-4 or the Book of Enoch!)…  Makes sense that the stars would become so important in the religions and ritual timing of our ancestors.

One other compelling question is the origin of our planetary knowledge and the symbols we use to represent the planets, which date back at least as far as early classical times.  The fact that the planets were known as planets in ancient times is impressive to me—especially since I was taught in school that Columbus and the Queen of Spain actually believed the world was flat (modern educational mind programming not even remotely rooted in fact, if you ask me).  Looking at Sumerian writings (some of our oldest surviving records), we see that they accounted for all the planets, even the outer planets that suposedly weren’t discoverd until the modern era when telescopes were available…  These orbits and motions of planets were known by the Sumerians, Egyptians, and Greeks for sure, and likely many other astrologically based cultures of the past.

The weaving pattern I used as the star-filled background is a very common pattern you’ll see in Islamic cultures.  It mimics the well established tradition of numerological and geometric representation called girih, which is a Persian word meaning “knot.”  Islamic law forbids artistic representation of humans or animals, so for centuries this culture has been exporing meaning through symbols, shapes, numbers, and patterns.  I often “see” the geometry and patterns in the heavens and found the Islamic star patten perfect, not only to represent the woven pattern nature of the stars but also the fractal nature of stars—where ribbons of stars are woven to create new stars.  Because the stars are 5 and 10 points, you’ll find lots of processional numbers woven into them as well…just divide 360 by 5 and 10 and you’ll get the idea (but don’t stop there!).

On the Nazca plains of Peru, dozens of strange animals, anthropomorphic beings, and geometric figures have been cut into the arid desert soil.  The area averages less than 15 minutes of rain per year and the process of erosion is very slow.  Because of this, no one can tell if these figures are 1,000 or 10,000 years old.  What is remarkable about these figures is that they can’t be observed or even recognized from the ground, or even from the surrounding mountain tops.  One has to be high above the ground to even decipher them.  Many people use these perplexing giant artworks as evidence that flight may not necessarily be a strictly modern technology.

One of these ruins is called the SunStar.  It’s a highly precise geometric form which demonstrates not only an understanding of the stars and their movements, but also complex geometry, numerology, musical correlations, and proportion.  The SunStar is prevalent in my painting to anchor the idea that while we (i.e. us humans) have been tracking the stars over thousands of years, the reasons why are lost to us today.  We recognize the high intelligence in the design, but we’re only guessing on the motives that created it.

Perhaps part of the allure of all this is that there is abundant evidence that stars were important to all our ancestors, but minimal knowledge as to why—and that only leaves us with mystery. There is no disputing that ancient structures around the world indicate that alignment with the sky was important.  So important, in fact, that they invested incredible amounts of energy to create structures that we can’t engineer today.  And there are very few ancient pyramids, mounds, cromlechs, earthworks, temples, burial sites, or megalithic structures that don’t align with the stars.  Makes me wonder why this alignment was so important that it was universally practiced.  Makes me wonder what they knew.  All those things we no longer know…about the sun and moon and stars.