Conversation with the Ancestors 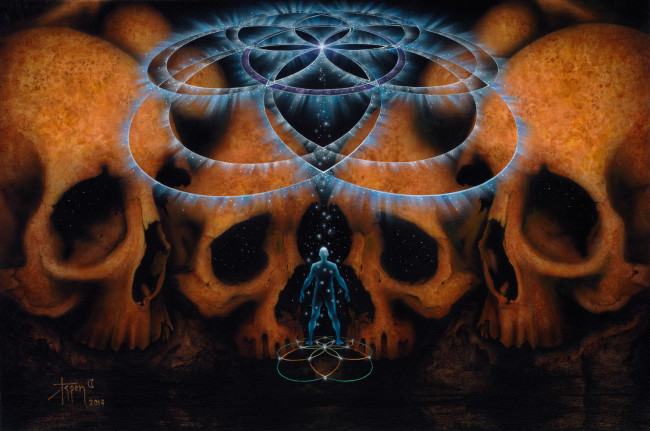 Recently, the thought of the ancient past has been on my mind. Part of it could be the time of year. In Autumn, we naturally reflect on change, on reaping, and on cycles of life. It is traditionally a time of ancestor worship—as seen in holidays like Dia de los Muertos and Samhain. I’m also about to visit the ancient ruins of Machu Picchu and many other ancient sites of Peru, as well as spend time with Amazonian indigenous people who still have the same customs their ancestors lived for centuries. The lost knowledge and mystery of the ancestors has been in the forefront of my consciousness. It seems a natural instinct to want to seek wisdom when one encounters individuals or places of ancient wisdom.

But aside from megalithic walls or great pyramids, what could symbolize the idea of ancestor wisdom? Often we attribute the symbol of the skull to the idea of death. But to reflect on what a skull actually represents…one need only remember that every skull was created through life. Through the living of a life, which eventually ended yes, but was lived fully before that end. When I look at images of catacombs or burial places, or piles of bones, instead of seeing death I see lives. People. I wonder about their stories. Perhaps some of their lives ended violently. Perhaps they didn’t. Notwithstanding, each of those skulls, and bones, and fragments were once very alive. They were people—who laughed, and cried, and ate, and played games, and made children, and worried, and worked too hard, an danced, and fought, and slept, and dreamed… Their sounds and vibrations echo and resonate in places long after the physical forms are gone. I know this personally after visiting dozens of ruins and ancient sites throughout the US and overseas. Maybe there’s an echo of life even in bones long dried by time. Perhaps we could rethink the association of the skull to death symbolism and remember that a skull can only come into being through a full life first.

Therefore, using a skull to represent a wise old life, already lived seemed very good to me. As a reference, I used an image from the catacombs under Paris, which I chose because I liked the two uniquely shaped skulls. I then flipped the image to create the symmetrical design (and the human shaped keyhole). The idea was to have these skulls, which represented branches of the Ancestors, actually create the context for the other figure. As if the figure were entering caves that looked like giant skulls, larger than life, commanding and perhaps menacing. Ancestors no longer inhabit the physical world. This means the figure accesses them not through physical means, but through metaphysical means, which I represented with a magic carpet of sorts, built of lower chakra energy. The eyes of the Ancestors open the viewer to the vastness of the Universe. Through the eyes of the Ancestors one can perceive all things, be all places, and know all things.

The overall design hearkens a tree. This is an obvious reference to the both the Tree of Life and one’s family tree—which if you go back far enough, we all come from the same branch or trunk. We’re all related. Your Ancestors are my Ancestors. The figure stands as the base of the tree, forming the trunk, for aren’t we all the trunk of our own family tree? The burst at the top is formed by two interconnecting seed of life patterns, which is a two-dimensional way to represent the egg of life, which is the form a human zygote takes after three replications. It is also the form to represent the sixth or final day of creation in the Judeo-Christian axiom. The two forms together represent the complete masculine and feminine expression polarities that make each of us. 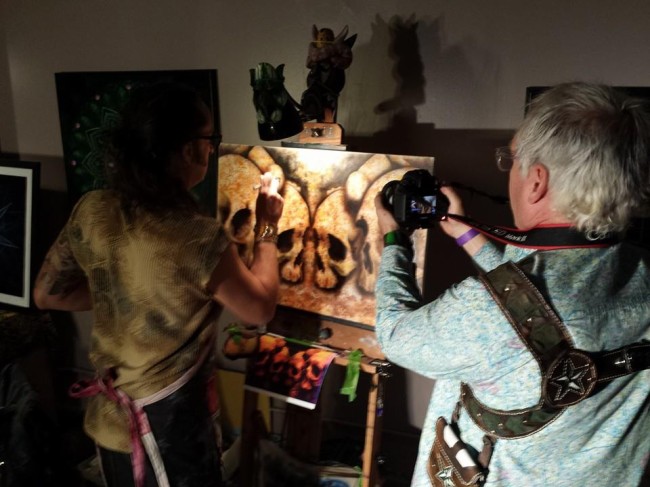 Part of this painting was completed in front of a live audience at the October 2014 Oogie Boogie event in Salt Lake City.  It was also a private commission so it is unlikely there will be any reproductions or prints of this image.

Tags: Conversation with the Ancestors