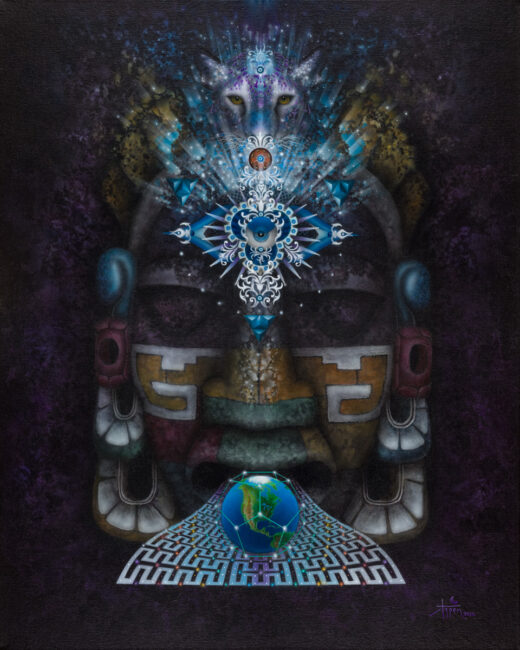 Because this painting is about music and sound, I’d like to suggest you stream from a recording of medicine songs (Spotify link) while you read and look.

I’m also including this link to a very long list of other icaros by Sacred Valley Tribe.   If you can’t decide which to start with, try “Las verdaderas curanderas” by Diego Palma, in the section called South American Icaros.  The Sacred Valley Tribe has graciously collected and shared a vast library of recordings of sacred songs from many cultures. Many have roots in thousands of years of oral tradition and have only been recorded in very recent years. Gratitude for their efforts and generous spirit.

To All My Relations:

Icaro comes from the Amazonian Shipibo tribe language as the word for the healing song of the Shaman. The commonly accepted origin of the word is a derivation of a Quechuan verb “to blow smoke in order to heal.”  Shipibo shamans attribute the inspiration, whistling, melody, and words of the songs to gifts from the spirits, and especially the spirits of the plant medicines they use in their rituals.  In fact, they believe that all living things have an icaro, which can be learned and understood.

The icaro is a critical component of the shamanic journey and plant medicine ceremonies and serves several purposes.  Many of the songs are made of words from several languages including Quechuan, Spanish, Portuguese, and even English, or they may just use sounds or vowels sung in a simple melody.  Most often sung a capella, these songs generally have few words, but they are repeated over and over—sometimes continuously for an hour or more.  The continual singing weaves a blanket of vibration that cradles, protects, and connects all those who hear it.  Some curanderos will use a rattle of bundled leaves called a chakapa to help carry the rhythm of the ceremony.  The words of the songs are often words of thanks to the powers, ancestors, spirits, and conscious energies, or songs of honoring and acknowledgment to the natural and supernatural forces and creatures that they believe surround us.  Many sing about nature, the Earth as our great mother, and the knowledge of animals, plants, and ancestors.  Icaros also act as an important thread or tether for those going through the ordeal of the ceremony, ensuring the journeyer can find their way back safely.  Fortunately, the pathway there and back again is marked by the footprints of the countless journeyers who have gone before.

Obviously, shamanic songs are not unique to the Peruvian Andes.  In fact, from Inuit to Maori, Tibetan to Gregorian, chants and sacred songs are practically universal.  And so is their purpose.  Shamans from all cultures harness the unique power of sound to work both inside and outside the body.  Melody and rhythm can be felt by the body as well as heard inside the head.  The rhythms, the words, the vibrations hold within them forces known to ancient wisdom that science has yet to acknowledge or understand. Nevertheless, I would guess that on an individual level, there are very few among us who don’t understand this—both intellectually as well as viscerally.

This painting captures the feelings and visions from personal experience with icaros.  It was over twelve years ago when I had my first experience both with the sacred songs and with the plant medicine ceremonies they are used in.  Admittedly, it was the first of these ceremonies that gave me courage and determination to finally open myself to begin painting.  In addition, these experiences caused me to begin to travel and see the world, and take some major chances with my life and my career, which eventually brought me to the place I am today.  My path has not always been easy—I’ve dealt with a lot of challenges and had to wrestle with many deep-seeded fears along the way.  But in the end, I wouldn’t change anything.  Most importantly, the experiences brought healing to my heart, which at the time was broken wide open and leaving me with little desire to keep going.  I’ve learned to have the courage to say “no,” and even more importantly I’ve learned to have the courage to say “yes.”  Especially to things I thought were beyond me or seemingly out of reach.

The journey of making this particular painting began shortly before I did my last medicine ceremony, back in 2014.  I was in the jungle of Peru and had an experience that, to this day, I still haven’t processed fully.  It had a lot to do with my dying mother, who has since passed beyond the veil.  But more than that, it had to do with fear.  My last experience was so intensely potent, that I had to step back from the ceremonies due to deep fear and anxiety, that I can honestly say has changed me forever.

Doing work with the plant medicines is not very enjoyable.  The experience isn’t anything that could be considered recreational or pleasureful.  Rather, it takes you to places of deep learning, introspection, and potent self reflection.  However, the result of this medicine is, in all facets, healing.  Perhaps this has to do with the plants, or perhaps it has to do with the resilient human nature.  One of the most intense aspects of plant medicine is the practical fact that it causes intense vomiting.  La Purga (the purge or purgative), as it is called, is venerated as an essential aspect of the experience.  With the purging comes release, intense cleansing (both physically and energetically), along with a dissolving of the ego and personal composure.  During one experience, I thought I was going to actually die from vomiting.  And between purges I was laughing at the notion and its poetic irony.

At its core, this painting is a deeply personal expression, based on experiences of my past that have shaped and molded my present and future.  These experiences were visionary, transformative, and healing, but in all honesty I believe I have some PTSD as a result of them.  Out of darkness, comes enlightenment.  And the brightest visions and most vivid colors are seen when eyes are closed.

One of the concepts portrayed in the painting is the idea of the fractal nature of the visionary experience and the fractal nature of the third eye (what some call the pineal gland, or the pictures and images you have when your eyes are closed).  The opening of the third eye for me was characterized by bright lights and vivid colors, especially when my eyes were closed, but also why my eyes were open.  Peering into nothing but the darkness of my surroundings, the light was blinding and almost overwhelming.  It exploded with geometry and points of light, like multi-color kaleidoscopes full of stars.  Through the inner eye I saw objects, beings, animals, all brightly luminescent, as if they were glowing and emitting their own light.  In my inner eye there opened other eyes, fractaling and enabling my vision to move simultaneously into multiple dimensions, as if my eyes had eyes, which also had eyes, and so on.  Thus, while the eyes of the visionary (represented by the mask) are closed, the third eye is wide open and seeing all, but also experiencing its own third eye vision, in the form of the open-eyed jaguar, which also sees clearly.  And then again the jaguar has its third eye open, which peers up into the realms of the ancestors, who observe everything.

Many of those who take plant medicine journeys (and particularly ayahuasca) have an experience of seeing the jaguar.  Some even see through the eyes of, or embody the jaguar directly.  They have the unforgettably vivid experience of running though the jungle, hunting, and traveling as a jaguar, as if their consciousness had been placed into the body and mind of the sacred animal.  While there are several theories as to the reasons why different people have this similar experience, psychology truly cannot explain how the same experience is shared by different individuals during these ceremonies.  Nevertheless, the phenomenon is undeniable. This is why the Jaguar is such a powerful symbol to the cultures who practice these shamanic rituals.

Blowing of the Smoke

Healing is the principle benefit from plant medicine work.  Hence the use of the word medicine.  Ayahuasca is one such plant, but there are many others.  Even the maligned tobacco plant has sacred and medicinal properties when used in ceremony and with right intent and purpose.  In certain ceremonies, where my stomach was angry and retching, it was sweet smelling tobacco smoke blown over me by the curandero that gave me relief and eased my suffering.  Blowing smoke also has a purifying energetic purpose and smoke is used to purify, bless, and cleanse in traditions and religions throughout the world.

In the painting, smoke coils around and supports the earth with purposeful and potent potentiality, filled with light and color, blessings and prayers.  I modeled the smoke after a Peano curve both relating it to the literal shape of our DNA and also the artistic style of the Shipibo tribe. Light and colorful smoke emerge from the mouth of the mask to offer prayers, healing, and cleansing to the Earth.

Many people have related to me that the shamanic practices of the Amazon have emerged over the past few decades at just the right time to address the decline of our environment and our planet’s health.  Some have told me the popularization of this medicine and tradition is a direct message from Gaia—the spirit or soul of Earth.  Many believe that these ceremonies are entering our social consciousness as a direct message of healing to change the destructive actions of the industrialized world.  It does seem to be offering a message of consolation and help to each person it reaches.  Individual by individual, ceremony by ceremony, plant medicines are changing how we “First World Westerners” are relating to the planet that is our source and gives us life.

Are you listening the Earth’s song?  Do you hear the songs of healing in your own life?

During our time on Earth, our history and traditions have most often been passed down orally, in the form of songs and lore.  Just as the invention of the computer doesn’t remove our need for printing, neither did the invention of writing remove our need for an oral tradition.  Gladly, our oral traditions are alive and well.  And even as you read this, you can be sure that in jungles, forest clearings, huts, houses, malokas, churches, temples, mosques, stone circles, mandirs, synagogues, stupas, shrines, and sacred spaces all over our beautiful home, Earth, we acknowledge what we all have in common as human beings—our source—and sing together the icaros of our ancestors.

May you always remember the songs of the Ancestors.