Mandala as a Prayer 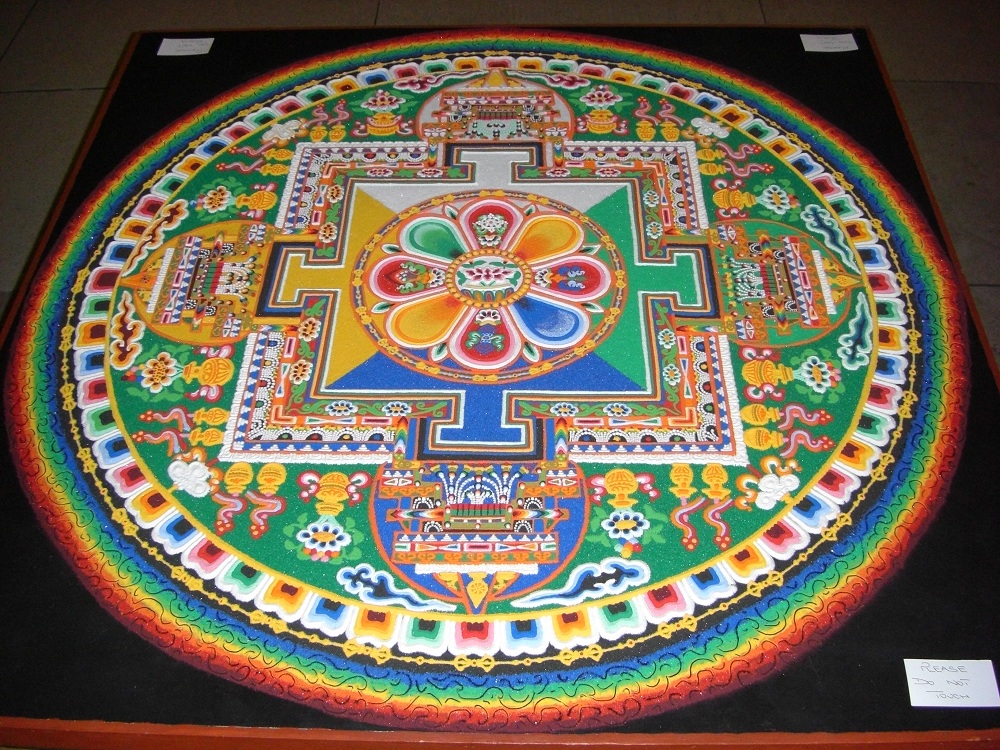 Tibetan Buddhism has an esoteric practice of the Trikaya Mandala Offering, which is a practice used to gain merit, positive benefits, or independence by offering the entire universe in a petition to specific deities or forces. Almost invariably offering mandalas, which are expressed through the commonly known sand paintings as well as ritualistic arranging of sacred rings filled with polished stones, represent the cosmos. Then, the mandala is structured after scriptural descriptions of the universe, with the sacred Mount Meru in the center and the continents, waters, mountains, deserts, seven emblems of royalty, etc., radiating outward. This representation imbues the most earnest and sincerest of sacrifice because everything is sacrificed.

Southwestern Native American cultures have a similar practice of making prayer offerings in the form of intricate sand paintings, which are generally symmetrical and often in the form of mandalas. While there isn’t an exact correlation between Navajo and Tibetan symbols, there are similarities. Particularly are references to nature, the cardinal directions, and using element symbols to represent all things. The prevalence of Gods and Power Forces in both cultures cannot be overlooked. A major difference is in how the intention is channeled through the creation of the mandala. In Navajo art, the purpose is to focus energy, strength, and power specifically toward healing, rather than to make a petition rooted in offering.

Throughout the world, sacred sand painting is inherently tied to the idea of impermanence. Ritual mandala offerings universally end with the ritual destruction of the artwork. Often the names and symbols of the deities have special means of destruction or unwinding. Sand is swept up together and often returned to nature in a conscious manner, representing the circular continuity and impermanence of all things.

It also implies that the value of the mandala isn’t necessarily in its being, but rather in its full process of creation, and one’s journey through the mandala. In other words, it is in working through the mandala that one offers the prayer… And all prayers have openings and closings.

Mandalas are also seen in Christian Worship. The most prevalent example of Christian mandala is in the rose window, which is a circular window over the West entrance of a cathedral or church. Generally the practice and dedication of the rose window was focused on Mary, as an offering to the softer dispositions of Christianity as Mary gradually took on the role of intercessor between humans and the pantocrator, or judgement-focused God. Though not overt, the rose window became to symbolize the grace of the Virgin which overlooked the Western entrance. One inherently and unwittingly offers prayer simply by entering the divine realm of the inner church, through the grace of the feminine.

As one delves into the mystery sects of Christianity, mandala imagery and use becomes even more common. Mandalas were used to guide learning, practice meditation, and encode esoteric knowledge. Christian Alchemy, Christian Hermeticism, and Rosicrucianism all demonstrate deeper understanding of geometry through their use of symmetrical and geometric mandala figures.

Again, the process is insinuated here.  It is through the mandala that one offers prayer.

Read other Blogs in my What is a Mandala Series

Tags: What is a Mandala