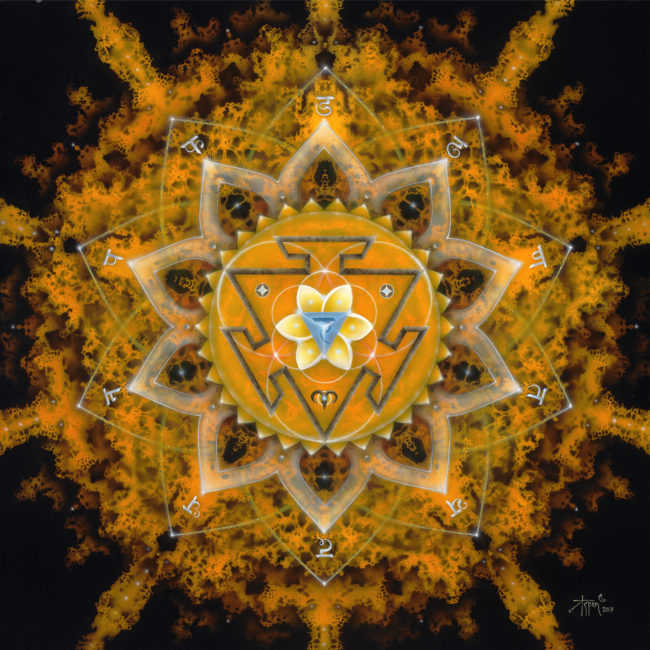 I started a new piece in my chakra series called Manipura, known by many as the Solar Plexus chakra, in Spring 2017 in preparation for my live painting performance at What the Festival, in June 2017 in Bear Run, Oregon. I had been working on the background so that’s it is ready to go come festival time. Below are a couple early photos of the work and where it’s going. Enjoy!

From WikiPedia: Manipura is considered the center of dynamism, energy, will power, and achievement (Itcha shakti), which radiates prana throughout the entire human body. It is associated with the power of fire and digestion, as well as with the sense of sight and the action of movement. Through meditating on Manipura, one is said to attain the power to create or destroy the world.

In the endocrine system, Manipura is said to be associated with the pancreas and the outer adrenal glands (the adrenal cortex). These glands create important hormones involved in digestion, converting food into energy for the body, in the same way that Manipura radiates Prana throughout the body.

Chakras.net adds “The fire of the Manipūra Chakra is a sacred power. It is the flame of life into which the Yogi sacrifices not only his food, but also his conscious breathing (Prānāyāma). When we understand that the taking of food and oxygen are acts of giving not taking, then these activities acquire great spiritual significance.”

Energy and personal power have been my stumbling blocks for a number of years now. So this will be my active meditation for a while. Hoping the meditation creates an energetic shift in my life. 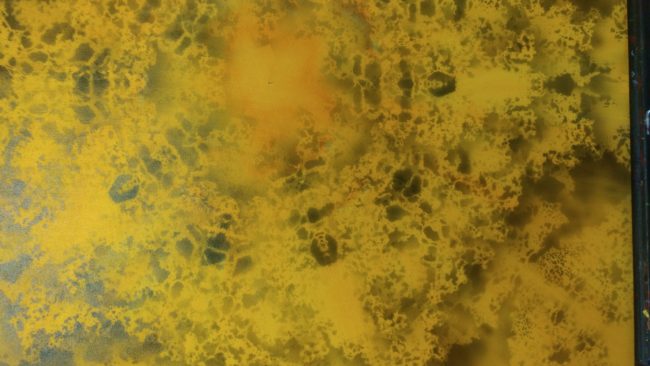 I’m about 2 sessions away from having the background ready (enough) for WTF.  I added orange last night: 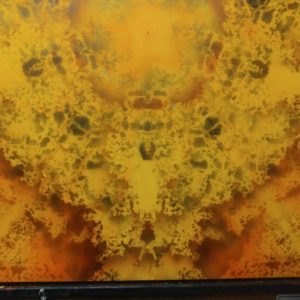 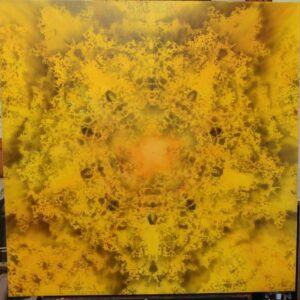 Next, I’ll start working on building the patterns and templates that I’ll use to create the 10-pedaled lotus, which is a component of the symbolism of the Manipura.  In addition, Sanskrit lettering to go on the pedals.

With another weekend session I was able to get past a critical design decision and get some of the black in place (black is the actual background color). There will be one more session adding black before it’s done, but from these photos you can get a sense of where it is going. The more dark I add, the brighter the entire painting looks and it’s important to darken all the colors (saturate too) so that when I add the white over the top it will be visible and look bright.

In addition, I designed and built the final pattern for the 10-pedaled lotus that will sit on top of this (transparent white pedals) and Sanskrit lettering each pedal. I’ll paint all that stuff and the inner mandala at WTF, but I’m getting all the precise measurements dialed in and the patterns made ahead of time. This will speed up the process once I’m at the festival.  I’m trying to condense what would normally take me weeks to do into the 3 days I’ll be working at the festival. I’m aiming to finish (or come close to finishing) the painting on the last day of the festival, which is Sunday, June 18. If all goes well, I’ll sign it on Summer Solstice 2017. 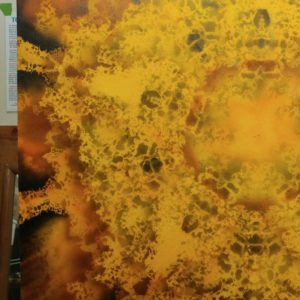 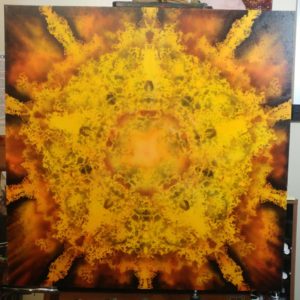 More black, pushing things back.  Also got the outer ring patterns measured, drawn, and ready to cut out.  Spent about 15 hours working on this over the weekend. Only half of it shows up on the canvas right now. I’ll use a bunch of patterns I make ahead of time to save time and get more done at the festival. 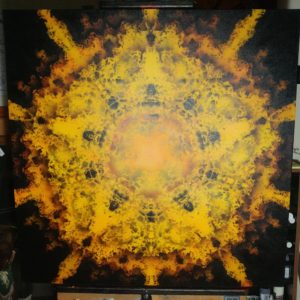 Well I wasn’t able to get the painting signed but it is getting very close.  And I hope to have it done in the next couple of weeks (finish over July 4 holiday).  For those who were at WTF, I’ll be offering a discount on prints of this work, once it is released.  The festival was great and despite a couple days of rain in the beginning, I was able to make a lot of progress on the work and spent the better part of 3 days painting at the festival.  It was a nice grove of trees to be working in, but a little removed from the main flow of the festival–next year I’ll ask to be by a stage if I go back.

Here are a few more photos of the platform I was working on as well as some photos of the Dream Collective Gallery where I had 4 more pieces hanging.

Finished work on the way!! 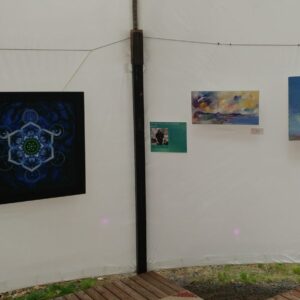 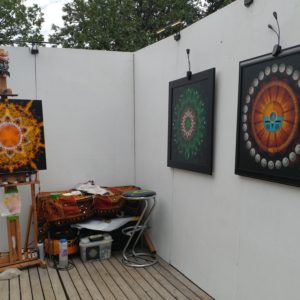 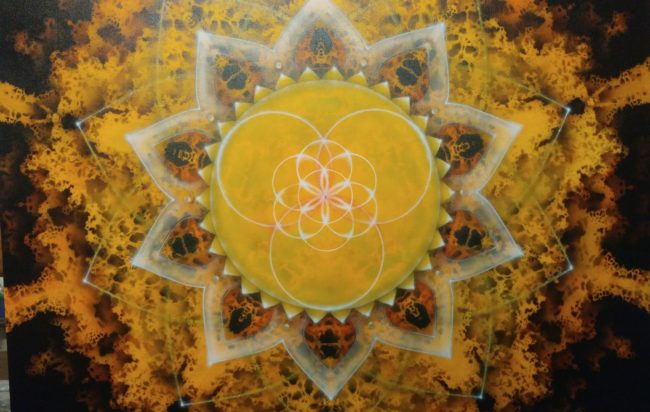 I made a list of everything left to do to finish the painting and we’re down to about 13 things… I’m hoping it will be done by July 4th. Planning on working on it all day until it is done. Got the bhupura put into place, which will eventually be gold. Here are more photos: 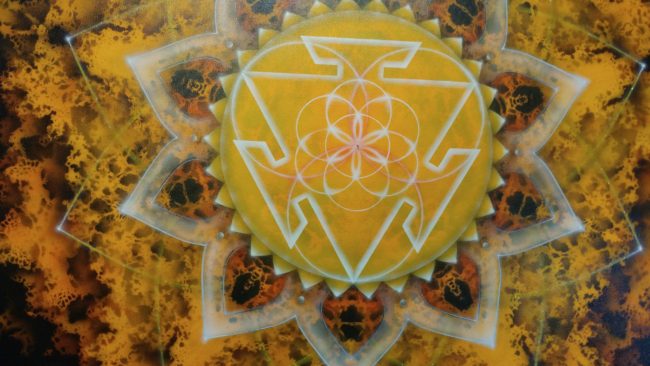 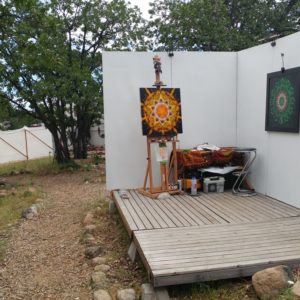 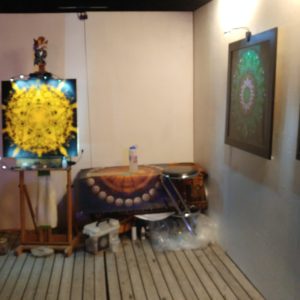 It’s so amazing when you’re about done with a painting and as you are doing your very last touches, you majorly screw up and destroy hours of work. This, alas, is what happened to me over the weekend. But I was able to recover ok–I learned long ago watching live artists that I admire that it’s ok to mess up and start over. In addition, when things like this happen, it is usually for the best. I was on the fence about my first attempt at the center plumeria flower, and whether it was good enough. Universe says it wasn’t and my repainting of the entire center part turned out much better that the first time. Practice.  I won’t post again on this work until after the opening on September 8, where I’ll show it for the first time. In the meantime, here’s a photo of what it looked like after I covered the center flower and started over…and a signature! 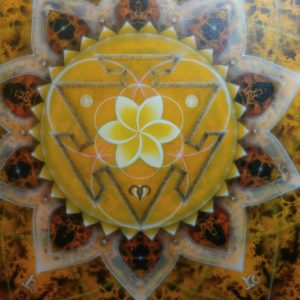 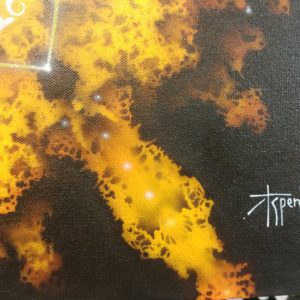